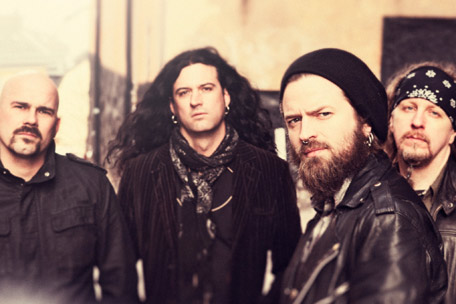 We’re all fine, thanks. A little bit tired after 4 great days at Sweden Rock Festival. Got to hung out with a bunch of cool people and old friends trading road-stories which is always fun. One was Jason Newsted from Metallica who was about as down-to-earth as you can get.

Started 20 years ago on the south-east coast of Sweden, we’ve made 7 albums so far, changed a couple of members here and there. Toured over Europe and the US a bunch of times. Just released our latest album called “Tiger Blood” on german label Metalville records. European tour coming up later this autumn.

It was actually a rather quick affair. We started recording basic-tracks in my hometown of Oskarshamn. We then moved ship to Gävle further up north were our singer lives and did all the vocals and some overdubs there. We actually had a church-choir singing on the track « Storm Cefore the Calm » which definitely was a first for us. Not your typical hard-rock thing but they added a really nice texture to the track.

According to our label they’re really pleased with the sales of the first few weeks. So all is good!

Reviews have been great, which pleases us a lot. There’s always a bit of uncertainty just before an album is released. Will the fans and critics understand what we’ve tried to achieve? To our relief it seems as everyone have gotten the idea of Tiger Blood which was to make an album the showed a little bit of all our influences.

Full Circle was in many ways a new start for the band. Finding the new singer Magnus Arnar really helped inject the band with a whole lot of new energy. He’s a huge part of the band and were we are today with his focus and determination.

We have a European tour lined up in November with Aussies Mammoth Mammoth but so far no dates in France as far as I know. We’re working on it though.

There’s been a bunch of funny situations over the years. Last year I bought a new pair of tight black pants. We played a festival in Germany and in the first song I do a classic Paul Stanley split-jump and my pants crack wide open. Good thing I was wearing underwear otherwise the audience would have gotten to see a lot more than what they had wished for. At that moment I was glad I were the bass-player so I could hide behind my bass…J

I’m a big fan of music so there’s a lot of cool stuff I’ve been listening to lately. I really like a British band called The Temperance Movement – earthy and bluesy! I’ve also been digging a Swedish punk-band called The Stäbs who made an amazing album in the school of Misfits called Bastard Train. Another band I’ve been enjoying is called Lord Huron which is a bit more ambient and low-key. I could go on and on about new bands but this is what pops to my mind right now.

Of course you have up’s and down’s – I took a break from the band for 7 years since I lost motivation. But since I did I’m now back feeling revitalized and really hungry again. And that’s the key to it all, if it isn’t fun you should step down or take a break for a few months (or in my case, years) and recharge your batteries. That’s how a band will survive for 20 years – you can’t force creativity.

We’ll continue to make albums and tour as long as we enjoy what we do and there’s an audience. For us The Quill is more than a band – it’s a way of life.